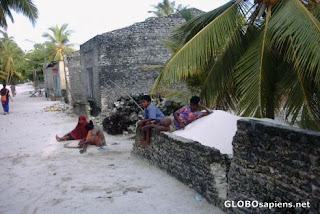 A joke I received from a friend. Modified to add Maldivian flavor. Read and N-joy!

Son: "Dad, I have to do a special report for school.Can I ask you a question?"

Father:"Sure son. What is the question?"

Son: "What is Maldivian Political system?"

Father:"Well. let's take our home for example. I'm the head of the family, so let's call me Government. Your mother makes the most decisions in the house ,so let's call her Majlis. We take care of your needs, so let's call you The People.We'll call the maid The Working class and your baby brother we can call The Future. Do you understand son?

Son: "I'm not really sure,dad. I'll have to think about it."

That night awakened by his brother crying,the boy went to see what was wrong. Discovering that the baby had seriously soiled his diaper,the boy went to his parents room and found his mother sound asleep. He went to the maid's room,where,peeking through the keyhole,he saw his father in bed with the maid.The boy's knocking went totally unheeded by his father and the maid, so the boy returned to his room and went back to sleep.

The next morning he reported to his father.

Father:"Good son! Can you explain it to me in your own words?"

Son: "Well dad,while Government is screwing The Working Class, Majlis is sound asleep, The People are being completely ignored and The Future is full of shit.